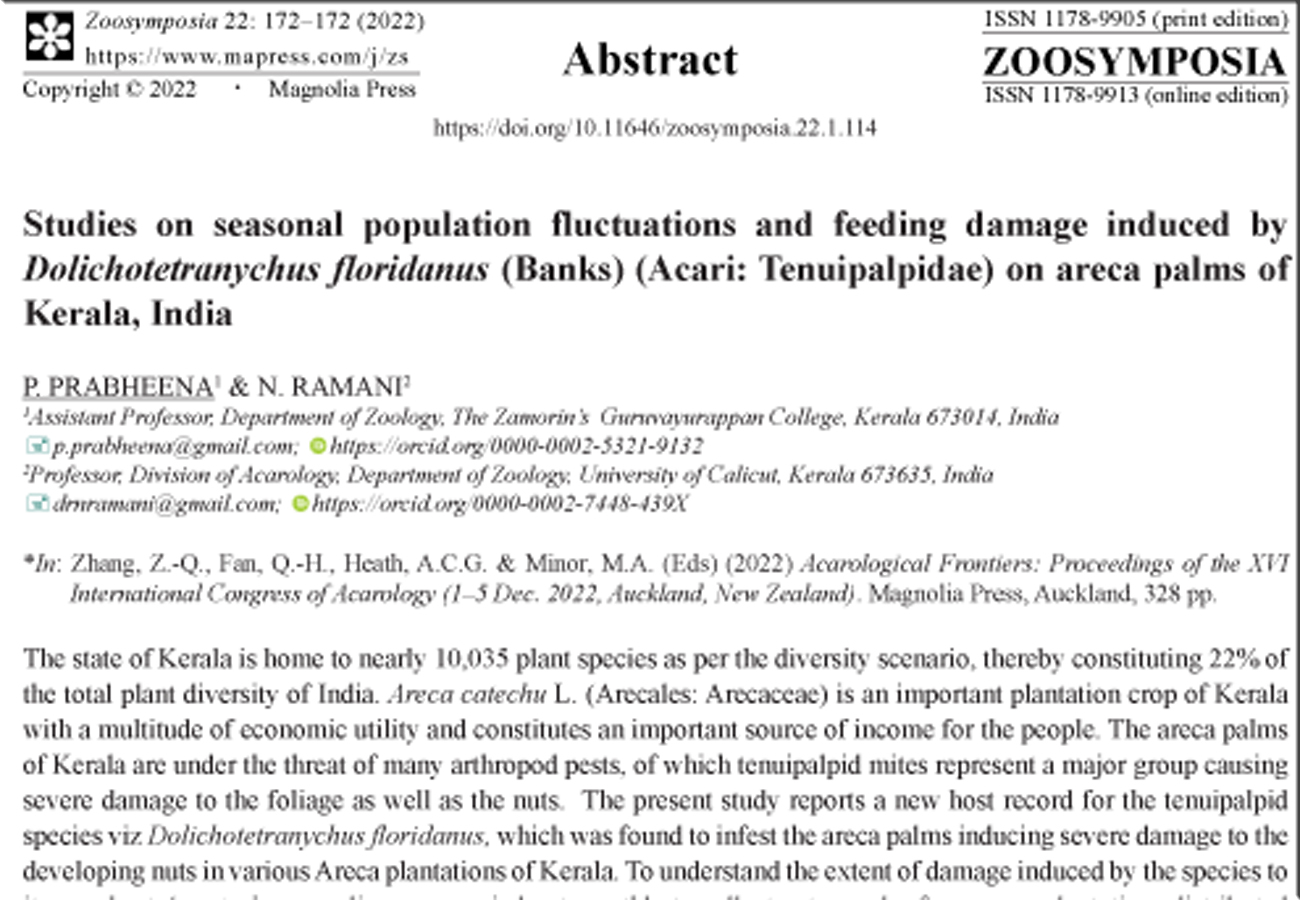 The state of Kerala is home to nearly 10,035 plant species as per the diversity scenario, thereby constituting 22% of the total plant diversity of India. Areca catechu L. (Arecales: Arecaceae) is an important plantation crop of Kerala with a multitude of economic utility and constitutes an important source of income for the people. The areca palms of Kerala are under the threat of many arthropod pests, of which tenuipalpid mites represent a major group causing severe damage to the foliage as well as the nuts.  The present study reports a new host record for the tenuipalpid species viz Dolichotetranychus floridanus, which was found to infest the areca palms inducing severe damage to the developing nuts in various Areca plantations of Kerala. To understand the extent of damage induced by the species to its new host A. catechu, sampling was carried out monthly to collect nut samples from areca plantations distributed in two districts viz. Kozhikode and Malappuram of North Kerala, for a period of two years from 2013 and 2015. The collected nut samples were examined in the laboratory under a stereozoom microscope (MVNSZ-450) and data were collected on the population density of the mite as well as the qualitative aspects of feeding damage induced by the mite on the nuts.  Results of population studies enabled to record peak population density of D. floridanus during July–August months. A positive correlation was found to exist between mite population and relative humidity and a negative correlation was recorded between mite population and temperature. The mean longevity of the females of this species at different temperatures and humidity conditions was recorded as 17.64 ± 0.17 days at 25 + 2oC & 80 + 5% RH, 13.64 ± 0.12 days at 30 + 2oC & 70 + 5% RH and 11.37 ± 0.12 days at 35 + 2oC & 60 + 5% RH. The feeding activity of the species was found to induce severe alterations, leading to the drying up of epidermal tissue, and formation of cracks at the affected region and the latter often served to permit the entry of fungal and bacterial pathogens, leading to tissue rot.