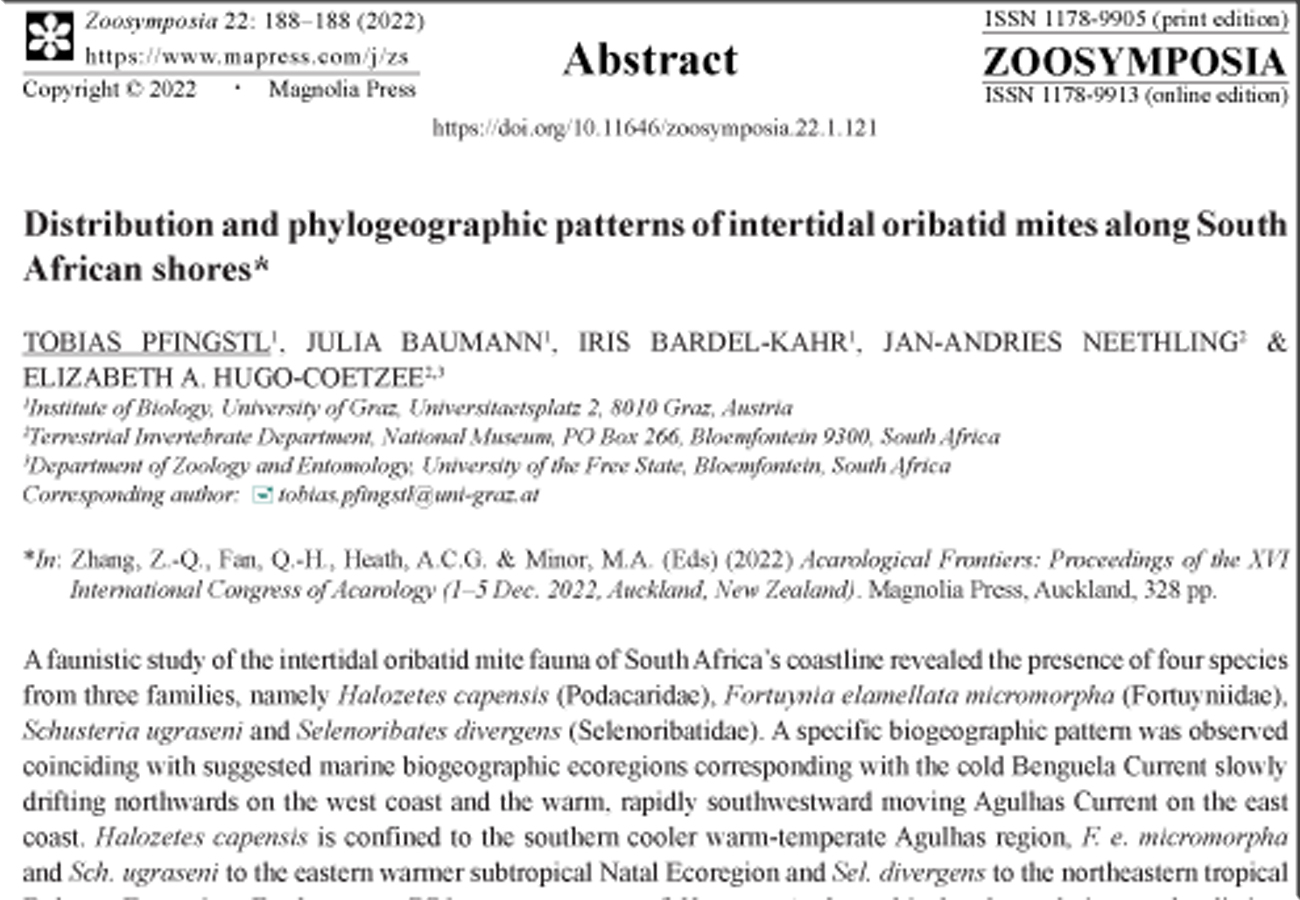 A faunistic study of the intertidal oribatid mite fauna of South Africa’s coastline revealed the presence of four species from three families, namely Halozetes capensis (Podacaridae), Fortuynia elamellata micromorpha (Fortuyniidae), Schusteria ugraseni and Selenoribates divergens (Selenoribatidae). A specific biogeographic pattern was observed coinciding with suggested marine biogeographic ecoregions corresponding with the cold Benguela Current slowly drifting northwards on the west coast and the warm, rapidly southwestward moving Agulhas Current on the east coast. Halozetes capensis is confined to the southern cooler warm-temperate Agulhas region, F. e. micromorpha and Sch. ugraseni to the eastern warmer subtropical Natal Ecoregion and Sel. divergens to the northeastern tropical Delagoa Ecoregion. Furthermore, CO1 gene sequences of H. capensis showed isolated populations and a distinct genetic structuring, while F. e. micromorpha showed gene flow between all populations and thus no distinct structure. The paleoenvironmental history and the ocean currents may be responsible for the observed patterns. During the last glacial maximum, the colder climate and the weakening of the Agulhas Current possibly resulted in a bottleneck in the warm adapted Fortuynia populations, but the subsequent global warming allowed the populations to expand again. The cold-adapted Halozetes populations experienced no dramatic changes during this period and thus could persist in the Agulhas Ecoregion. Considering transport on ocean currents, the Agulhas Current on the east coast could be further responsible for connectivity between Fortuynia populations, but the deflection on the south-eastern coast could support the isolation of the Halozetes populations. It is difficult to determine how individual populations may be influenced by climate change, but in general, with global warming induced changes in sea surface temperatures, warm adapted fortuyniid and selenoribatids can be expected to expand their ranges southward, while the distribution of the cold adapted podacarid might be reduced to a few southwestern coastal areas.