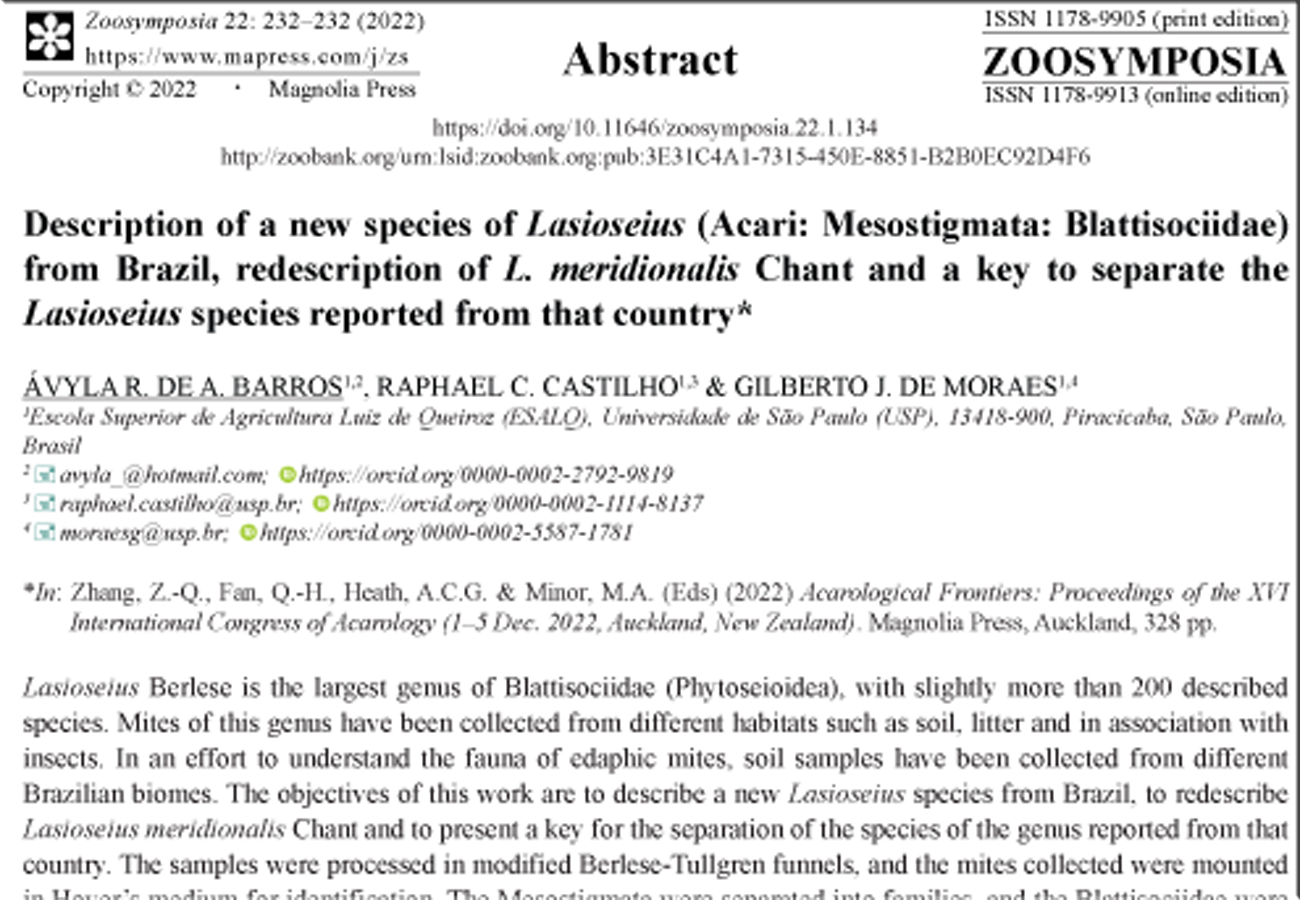 Description of a new species of Lasioseius (Acari: Mesostigmata: Blattisociidae) from Brazil, redescription of L. meridionalis Chant and a key to separate the Lasioseius species reported from that country

Lasioseius Berlese is the largest genus of Blattisociidae (Phytoseioidea), with slightly more than 200 described species. Mites of this genus have been collected from different habitats such as soil, litter and in association with insects. In an effort to understand the fauna of edaphic mites, soil samples have been collected from different Brazilian biomes. The objectives of this work are to describe a new Lasioseius species from Brazil, to redescribe Lasioseius meridionalis Chant and to present a key for the separation of the species of the genus reported from that country. The samples were processed in modified Berlese-Tullgren funnels, and the mites collected were mounted in Hoyer’s medium for identification. The Mesostigmata were separated into families, and the Blattisociidae were separated into genera. The Lasioseius specimens were compared with the original descriptions and redescriptions of the species presently placed in the genus, leading to the conclusion that part of the specimens belonged to a new species. Other specimens belonged to a species taxonomically known only from the original description, L. meridionalis, which was redescribed. Lasioseius n. sp. has an unusual feature among the Lasioseius species for having dorsal setae mostly bacilate and saber to leaf-shapped. This species is most similar to L. foliatisetus Merlin et al. in also having a wide peritreme, but differs for not having post-stigmatic extension of the peritreme and different dorsal shield setae. The other species collected in this work is very similar to Lasioseius barbensiensis Faraji & Karg, morphologically known only from the original description, based solely on the holotype. The examination of part of the specimens collected and of the holotypes of L. barbensiensis and L. meridionalis led us to the conclusion that they represent two similar species, differing mostly in relation to the spermathecal apparatus. Lasioseius barbensiensis has been previously reported from Brazil, but L. meridionalis is reported for the first time. With this publication, the total number of Lasioseius species reported from Brazil is increased to nineteen, which can be separated with a key presented in this publication. Financial support FAPESP (2019/27793-7; 2017/12004-1).