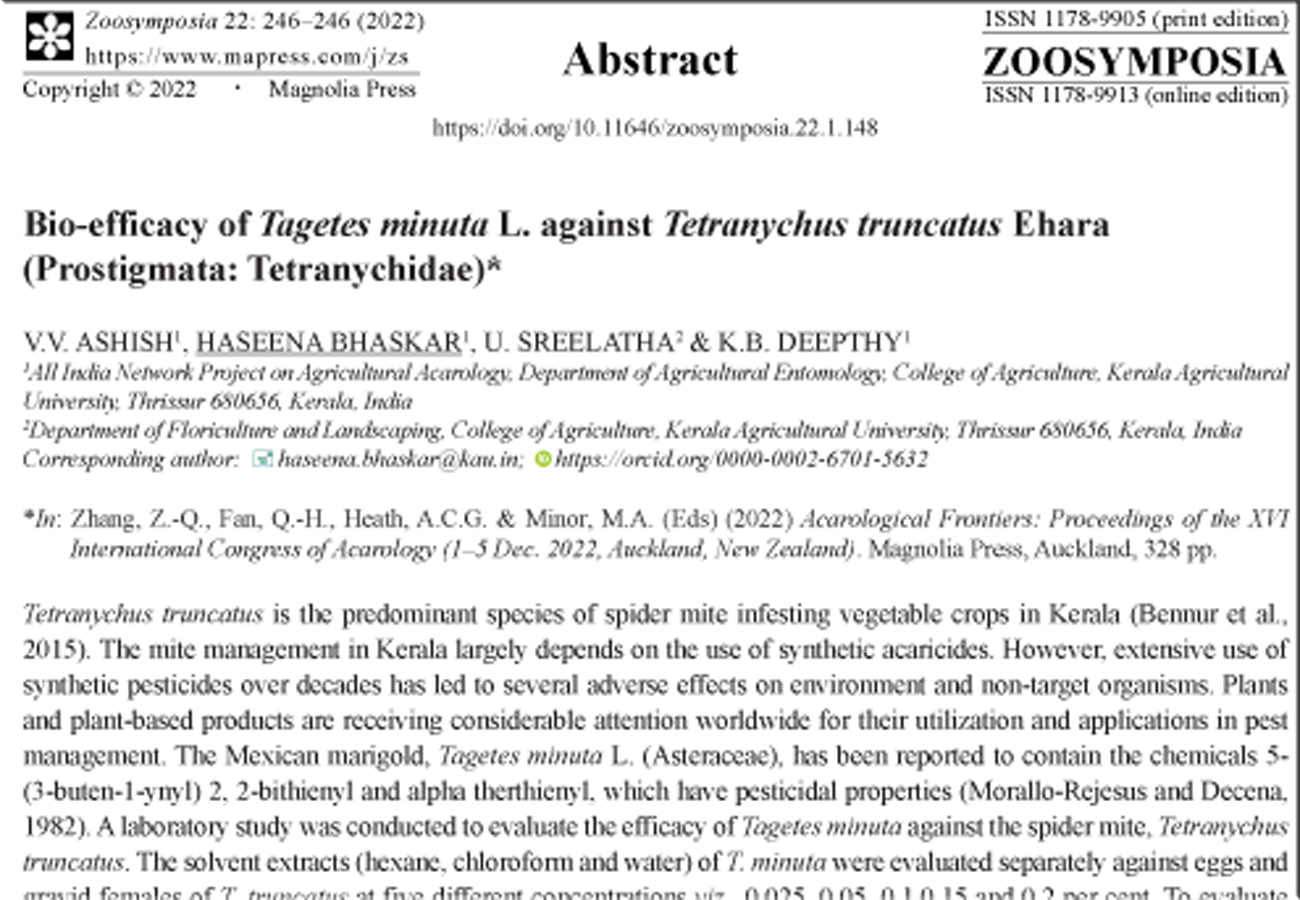 Tetranychus truncatus is the predominant species of spider mite infesting vegetable crops in Kerala (Bennur et al., 2015). The mite management in Kerala largely depends on the use of synthetic acaricides. However, extensive use of synthetic pesticides over decades has led to several adverse effects on environment and non-target organisms. Plants and plant-based products are receiving considerable attention worldwide for their utilization and applications in pest management. The Mexican marigold, Tagetes minuta L. (Asteraceae), has been reported to contain the chemicals 5-(3-buten-1-ynyl) 2, 2-bithienyl and alpha therthienyl, which have pesticidal properties (Morallo-Rejesus and Decena, 1982). A laboratory study was conducted to evaluate the efficacy of Tagetes minuta against the spider mite, Tetranychus truncatus. The solvent extracts (hexane, chloroform and water) of T. minuta were evaluated separately against eggs and gravid females of T. truncatus at five different concentrations viz., 0.025, 0.05, 0.1,0.15 and 0.2 per cent. To evaluate the ovicidal effect, ten gravid females were released on mulberry leaf bit (5×5 cm) placed in Petri plate lined with moistened cotton and allowed for egg laying. The adults were removed after 24 h and 25 eggs were retained per leaf bit.  The solvent extracts were applied on the leaf bits with eggs using hand atomizer and observed for egg hatchability at 24, 48, 72 and 96 h of spraying and per cent mortality of egg was calculated. To evaluate the adulticidal activity, mulberry leaf bits were dipped in solvent extracts for 30 seconds, air dried and placed in a Petri plate lined with moistened cotton. Twenty-five gravid females were released to the leaf bit and adult mortality was recorded after 24, 48, 72, 96 and 120 h of treatment and per cent mortality was calculated. The extracts varied significantly in their ovicidal and adulticidal effects. Among the different extracts, 0.2 % hexane extract was found to be significantly superior in ovicidal activity over other treatments and recorded 100 per cent mortality at 120 h after treatment. This was followed by 0.15 and 0.1 per cent hexane extracts which recorded 81.33 and 53.33 per cent egg mortality, respectively. The hexane extracts 0.2 % and 0.15 % were found to be significantly superior over other treatments, recording 93.33 and 92 per cent adult mortality, respectively within 120 h of application. This was followed by 0.2 % chloroform and 0.1 % hexane extracts, recording 73.33 and 72.00 per cent mortality, respectively. These results indicate that Mexican marigold possess excellent acaricidal properties and the hexane and chloroform extracts of the plant can be explored for further utilization in the management of spider mites.