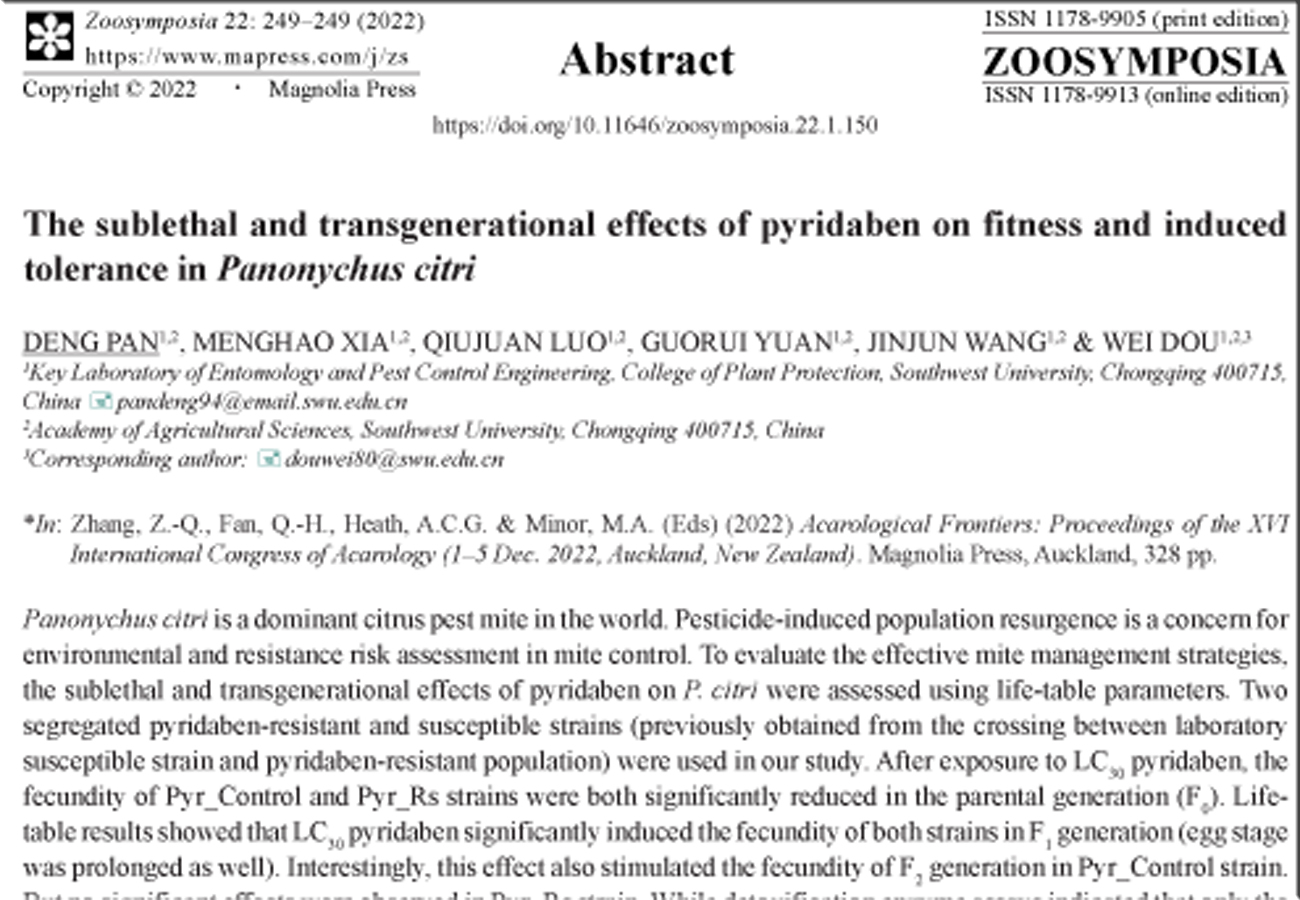 Panonychus citri is a dominant citrus pest mite in the world. Pesticide-induced population resurgence is a concern for environmental and resistance risk assessment in mite control. To evaluate the effective mite management strategies, the sublethal and transgenerational effects of pyridaben on P. citri were assessed using life-table parameters. Two segregated pyridaben-resistant and susceptible strains (previously obtained from the crossing between laboratory susceptible strain and pyridaben-resistant population) were used in our study. After exposure to LC30 pyridaben, the fecundity of Pyr_Control and Pyr_Rs strains were both significantly reduced in the parental generation (F0). Life-table results showed that LC30 pyridaben significantly induced the fecundity of both strains in F1 generation (egg stage was prolonged as well). Interestingly, this effect also stimulated the fecundity of F2 generation in Pyr_Control strain. But no significant effects were observed in Pyr_Rs strain. While detoxification enzyme assays indicated that only the activity of P450s was significantly activated by LC30 pyridaben in Pyr_Control and Pyr_Rs strains (1.242- fold and 1.355-fold increase, respectively). The expressions of P450 gene (CYP4CL2) and reproduction-related gene (Pc_Vg) were determined and the results showed that the expression of Pc_Vg of pyridaben treated mites in F0 generation was significantly reduced in both strains. In Pyr_Control and Pyr_Rs strains, the significant upregulation CYP4CL2 (2.029-fold and 2.516-fold increase, respectively) and PcVg (1.771-fold and 2.924-fold increase, respectively) of F1 generation suggested there were delayed hormesis effects on reproduction and developed tolerance to pyridaben. No significant difference was found between LC30 treatments and controls in F2 generation of both strains. These results provided evidence that transgenerational hormesis effects of low concentration of pyridaben might lead to mite population outbreak and resistance risk in the field through stimulating the reproduction and developing tolerance to pyridaben. Furthermore, LC30 pyridaben could affect the offspring populations of susceptible strain in the longer-term as compared to resistant strain.