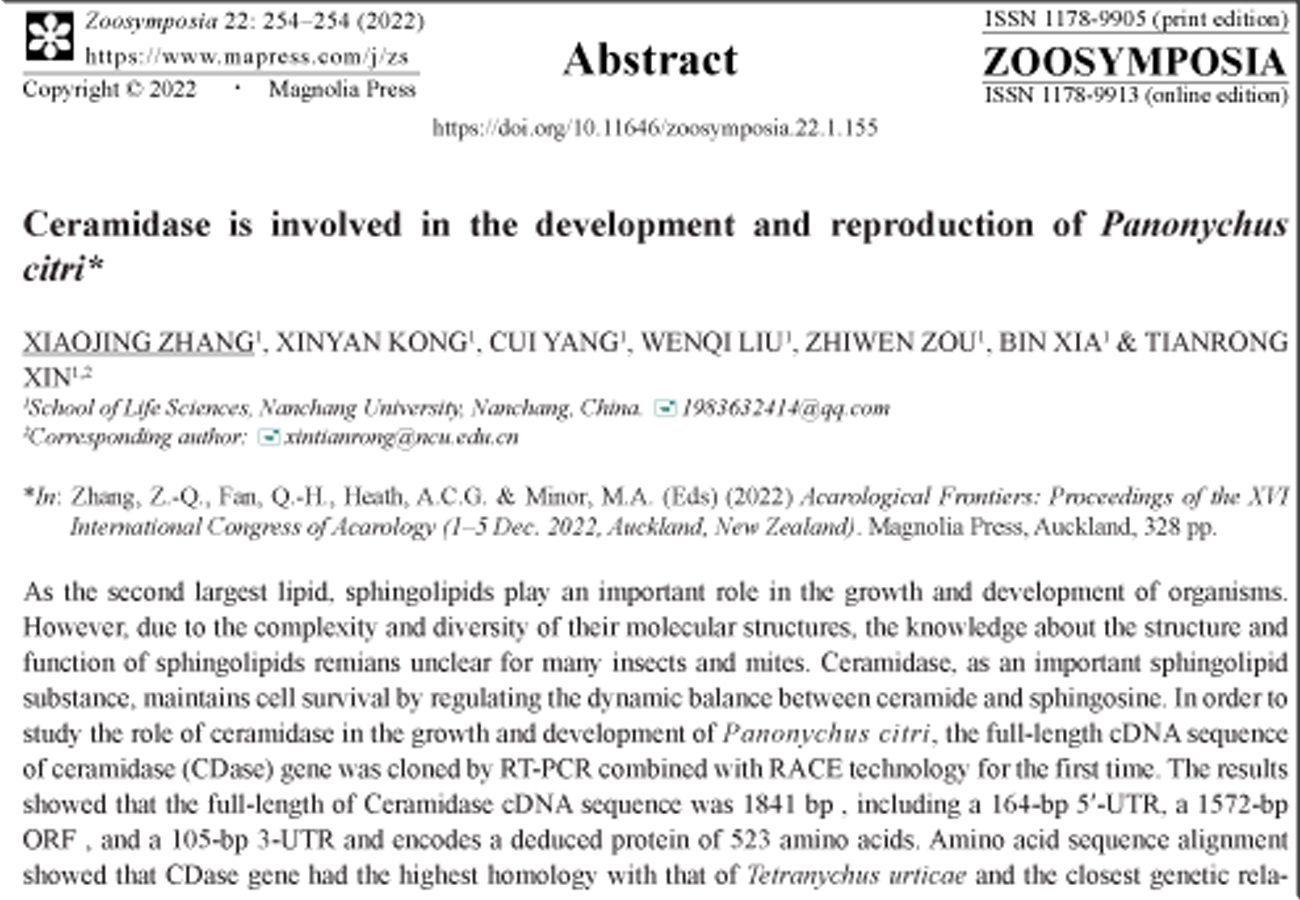 Ceramidase is involved in the development and reproduction of Panonychus citri

As the second largest lipid, sphingolipids play an important role in the growth and development of organisms. However, due to the complexity and diversity of their molecular structures, the knowledge about the structure and function of sphingolipids remians unclear for many insects and mites. Ceramidase, as an important sphingolipid substance, maintains cell survival by regulating the dynamic balance between ceramide and sphingosine. In order to study the role of ceramidase in the growth and development of Panonychus citri, the full-length cDNA sequence of ceramidase (CDase) gene was cloned by RT-PCR combined with RACE technology for the first time. The results showed that the full-length of Ceramidase cDNA sequence was 1841 bp , including a 164-bp 5′-UTR, a 1572-bp ORF , and a 105-bp 3-UTR and encodes a deduced protein of 523 amino acids. Amino acid sequence alignment showed that CDase gene had the highest homology with that of Tetranychus urticae and the closest genetic relationship with it. In addition, quantitative analysis using RT-qPCR of the gene expression levels of CDase during different developmental stages demonstrated that the CDase gene was expressed during all developmental stages of P. citri, and the relative expression in larvae was significantly higher than those in other stages. Furthermore, RNAi technology was used to silence CDase gene of P. citri, and the corresponding expression and mortality analysis were observed under different concentration gradients (1500ng/ul, 2000ng/ul, 2500ng/ul) and time gradients (24h, 48h). The dsRNA treatment of CDase gene showed a decrease in gene expression. Compared with the control group, the gene expression of CDase in the dsRNA treatment at 2000 ng/ul decreased by 72%, and the mortality rate of adult females increased by 40%. Furthermore, CDase genes treated with dsRNA also decreased by 78% within 48 hours. In general, the interference effect of dsRNA at 2000 ng/ul and 48h was the best, compared with the control group. Our findings will provide insight into the molecular mechanisms regulating lipid metabolism in P. citri.