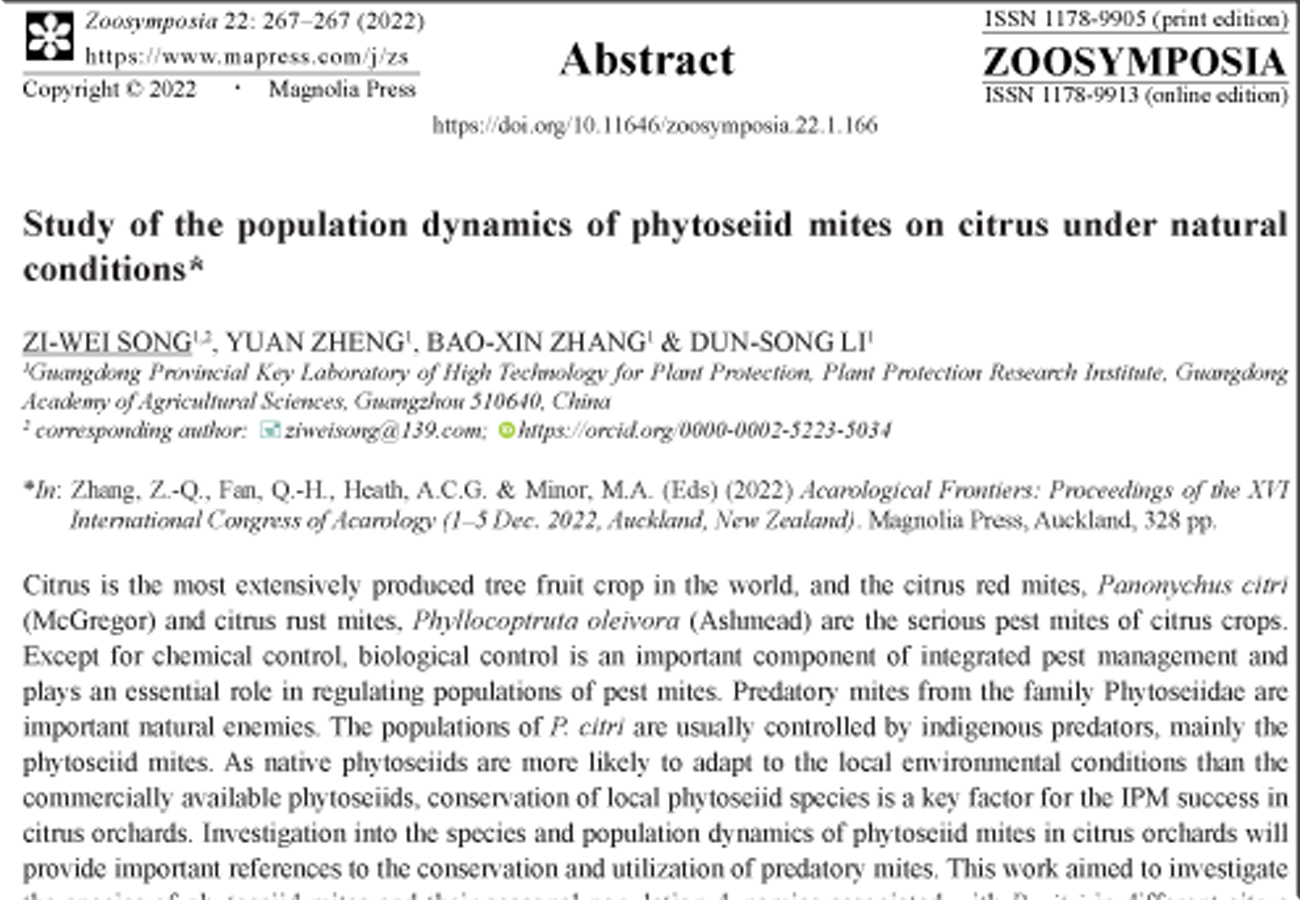 Citrus is the most extensively produced tree fruit crop in the world, and the citrus red mites, Panonychus citri (McGregor) and citrus rust mites, Phyllocoptruta oleivora (Ashmead) are the serious pest mites of citrus crops. Except for chemical control, biological control is an important component of integrated pest management and plays an essential role in regulating populations of pest mites. Predatory mites from the family Phytoseiidae are important natural enemies. The populations of P. citri are usually controlled by indigenous predators, mainly the phytoseiid mites. As native phytoseiids are more likely to adapt to the local environmental conditions than the commercially available phytoseiids, conservation of local phytoseiid species is a key factor for the IPM success in citrus orchards. Investigation into the species and population dynamics of phytoseiid mites in citrus orchards will provide important references to the conservation and utilization of predatory mites. This work aimed to investigate the species of phytoseiid mites and their seasonal population dynamics associated with P. citri in different citrus cultivars orchards. We sampled phytoseiid mites from orchards planted with three citrus cultivars of citron-lemon, Ehime Kashi No. 28 and Shatangju, respectively, from April to December in 2018⁓2021. Species of phytoseiid mites, and their developmental stage and gender were identified under a microscope. In the citron-lemon orchard, we recorded nine phytoseiid species in 2018, but only three species in 2019. The dominant species was Scapulaseius newsami (Evans). In 2020, five species with a dominant species of Euseius nicholsi (Ehara et Lee) were found in Ehime Kashi No. 28 orchard, but only two with a dominant species of Neoseiulus californicus (McGregor) detected in the Shatangju orchard. In the Shatangju orchard in 2021, six species were recorded with N. californicus being dominant from April to July, and Amblyseius eharai Amitai & Swirski being dominant from August to December. The population of predatory mites peaked in May and October in the citron-lemon orchard, and in May, July and October in the Ehime Kashi No. 28 and Shatangju orchards. All active life stages (i.e., larva, nymph and adult) were found and most were adults. The sex ratio was female-biased (over 80%) in each orchard. In conclusion, the population size of phytoseiids changed over the growing seasons. Whether this could be attributed to the different tolerance capacities of different species to the local climate conditions or chemical pesticides remains for future studies.