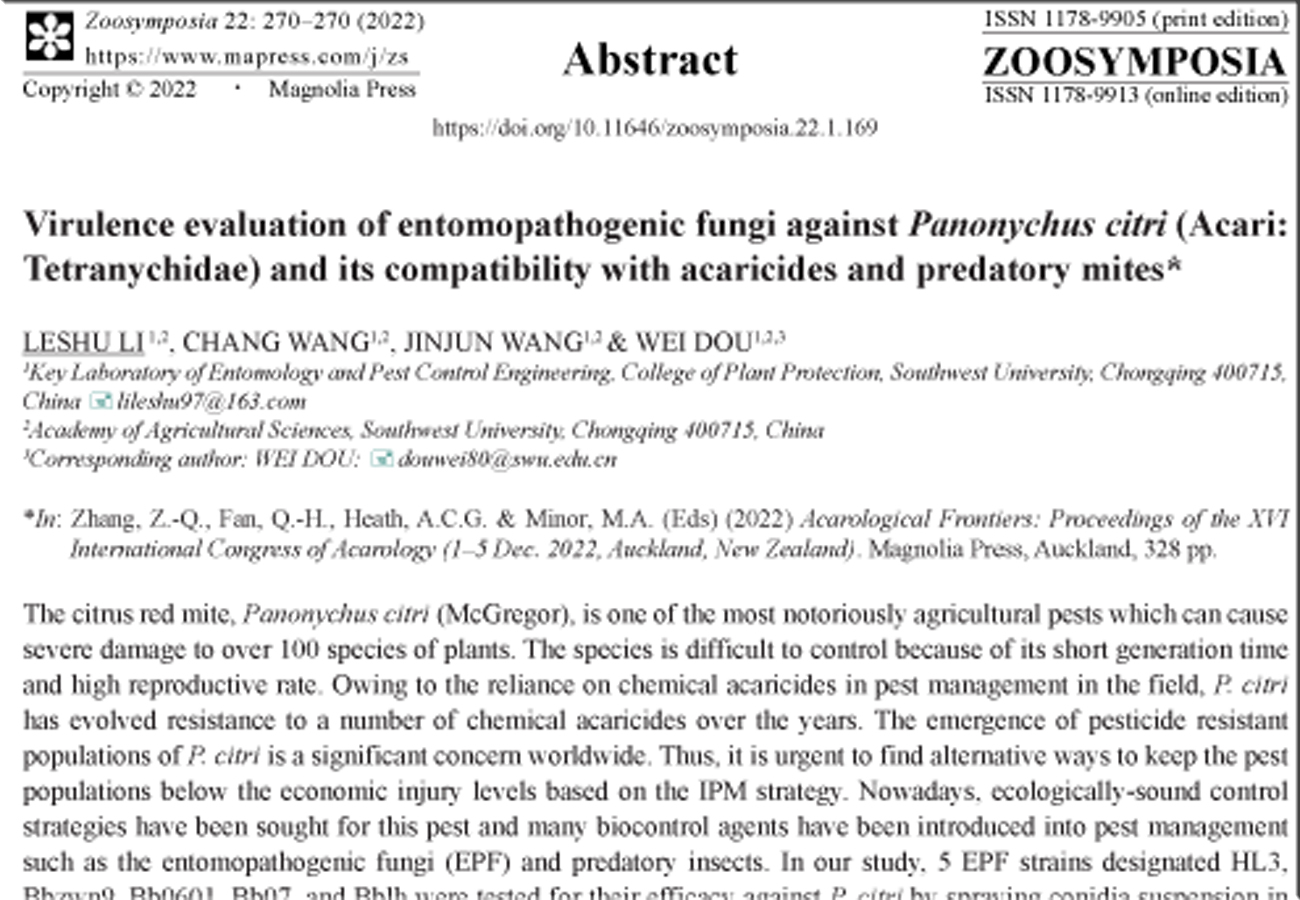 Virulence evaluation of entomopathogenic fungi against Panonychus citri (Acari: Tetranychidae) and its compatibility with acaricides and predatory mites

The citrus red mite, Panonychus citri (McGregor), is one of the most notoriously agricultural pests which can cause severe damage to over 100 species of plants. The species is difficult to control because of its short generation time and high reproductive rate. Owing to the reliance on chemical acaricides in pest management in the field, P. citri has evolved resistance to a number of chemical acaricides over the years. The emergence of pesticide resistant populations of P. citri is a significant concern worldwide. Thus, it is urgent to find alternative ways to keep the pest populations below the economic injury levels based on the IPM strategy. Nowadays, ecologically-sound control strategies have been sought for this pest and many biocontrol agents have been introduced into pest management such as the entomopathogenic fungi (EPF) and predatory insects. In our study, 5 EPF strains designated HL3, Bbzwn9, Bb0601, Bb07, and Bblh were tested for their efficacy against P. citri by spraying conidia suspension in the laboratory. Amongst these, the HL3 strain exhibited the highest pathogenicity against P. citri and was identified as Isaria cateniannulata using ITS sequences. Further bioassays of HL3 strain indicated the LC50 (3.093x104 conidia/mL) at 7 d post inoculation and the LT50 (3.356 d) at a concentration of 1x108 conidia/mL against P. citri. Subsequently, HL3 was evaluated for its compatibility with four commonly used chemical acaricides at their low dosages (gradient dilution of their labeled application rates for P. citri control) and its side effects on the predatory mite, Neoseiulus barkeri. Briefly, HL3 exhibited an ideal compatibility with avermectin compared to other three acaricides, with the lowest inhibition rate of colony growth, sporulation and spore germination in the PDA culture medium containing avermectin. Besides, the fungal strain was harmless to N. barkeri with only 9.167% mortality rate, and no significant impact was recorded on N. barkeri oviposition rates, although HL3 possessed a slightly negative effect on the predatory ability of N. barkeri. The analysis of functional response indicated that compared with the untreated P. citri, the handling time of predator increased on HL3-treated P. citri, while the attack rates decreased with the increase of the time after inoculation. In summary, in combination with avermectin or the natural enemy N. barkeri, HL3 exhibited a potential ability for sustainable control of the mite pest.