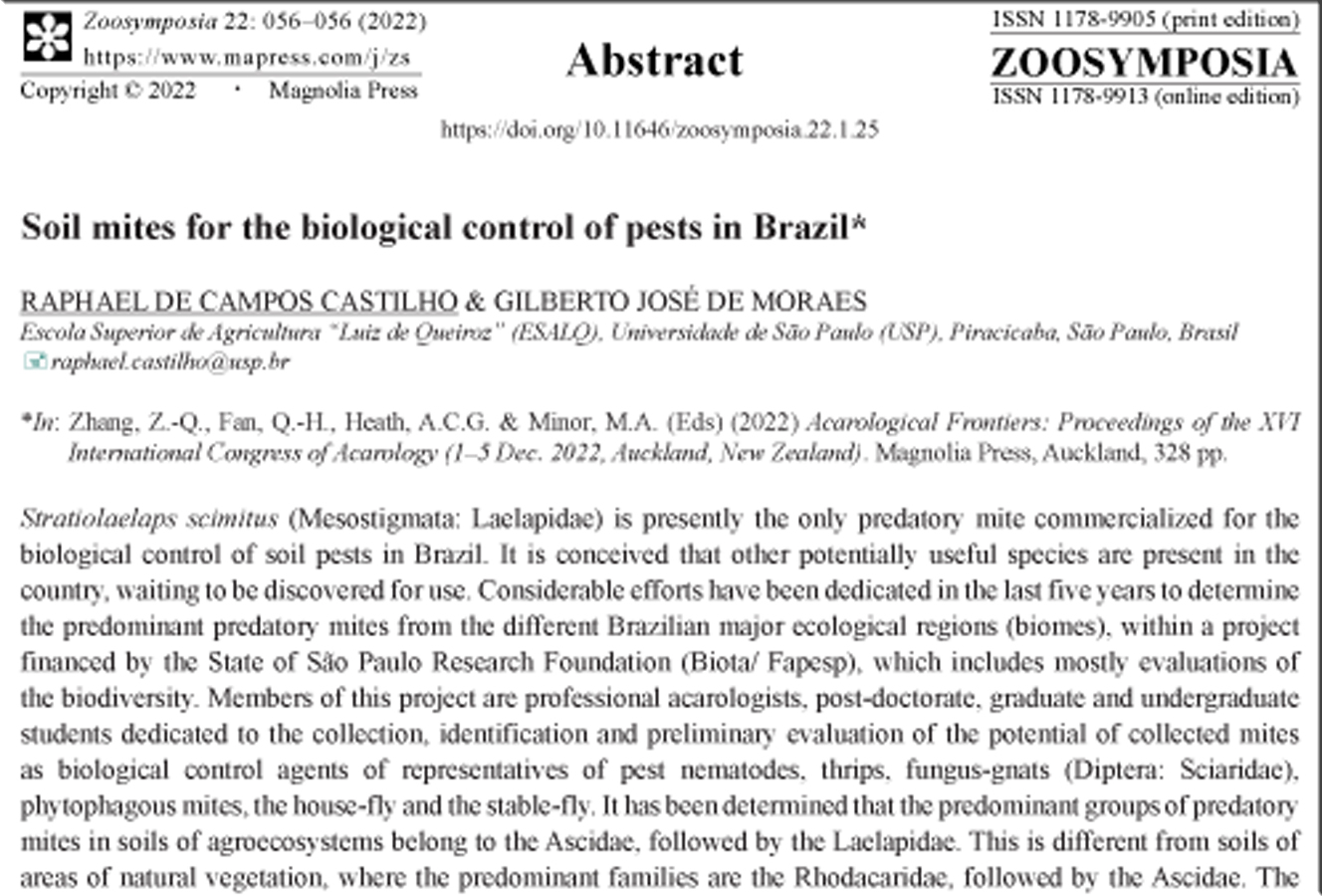 soil mites for the biological control of pests in Brazil

Stratiolaelaps scimitus (Mesostigmata: Laelapidae) is presently the only predatory mite commercialized for the biological control of soil pests in Brazil. It is conceived that other potentially useful species are present in the country, waiting to be discovered for use. Considerable efforts have been dedicated in the last five years to determine the predominant predatory mites from the different Brazilian major ecological regions (biomes), within a project financed by the State of São Paulo Research Foundation (Biota/ Fapesp), which includes mostly evaluations of the biodiversity. Members of this project are professional acarologists, post-doctorate, graduate and undergraduate students dedicated to the collection, identification and preliminary evaluation of the potential of collected mites as biological control agents of representatives of pest nematodes, thrips, fungus-gnats (Diptera: Sciaridae), phytophagous mites, the house-fly and the stable-fly. It has been determined that the predominant groups of predatory mites in soils of agroecosystems belong to the Ascidae, followed by the Laelapidae. This is different from soils of areas of natural vegetation, where the predominant families are the Rhodacaridae, followed by the Ascidae. The reason for this difference in composition of predatory mites should help in determining the convenience to change agricultural practices in order to favor certain beneficial species and hence reduce pest problems. The potential of representative species as biological control agents is under investigation, with promising results. Reduction of up to 90% of the house fly and up to 70% of the stable fly population levels were estimated, with localized field releases of Macrocheles embersoni or Macrocheles muscaedomesticae (Macrochelidae). Over 60% reduction in population level of the soybean cyst nematode, Heterodera glycines, one of the most harmful and difficult pests to control in soybean, has been estimated in soils of pots with soybean plants, with releases of Protogamasellopsis zaheri (Rhodacaridae) and S. scimitus. About 45% reduction in population level of the root-knot nematode Meloidogyne incognita was estimated in soils of pots with tomato plants, with releases of the same predator as well as of the free-living nematode Rhabditella axei. It is suggested that provisioning and or conserving alternative food sources for the predatory mites, such as free-living nematodes, could further improve natural biological control. The efficacy of other predator species is under investigation.