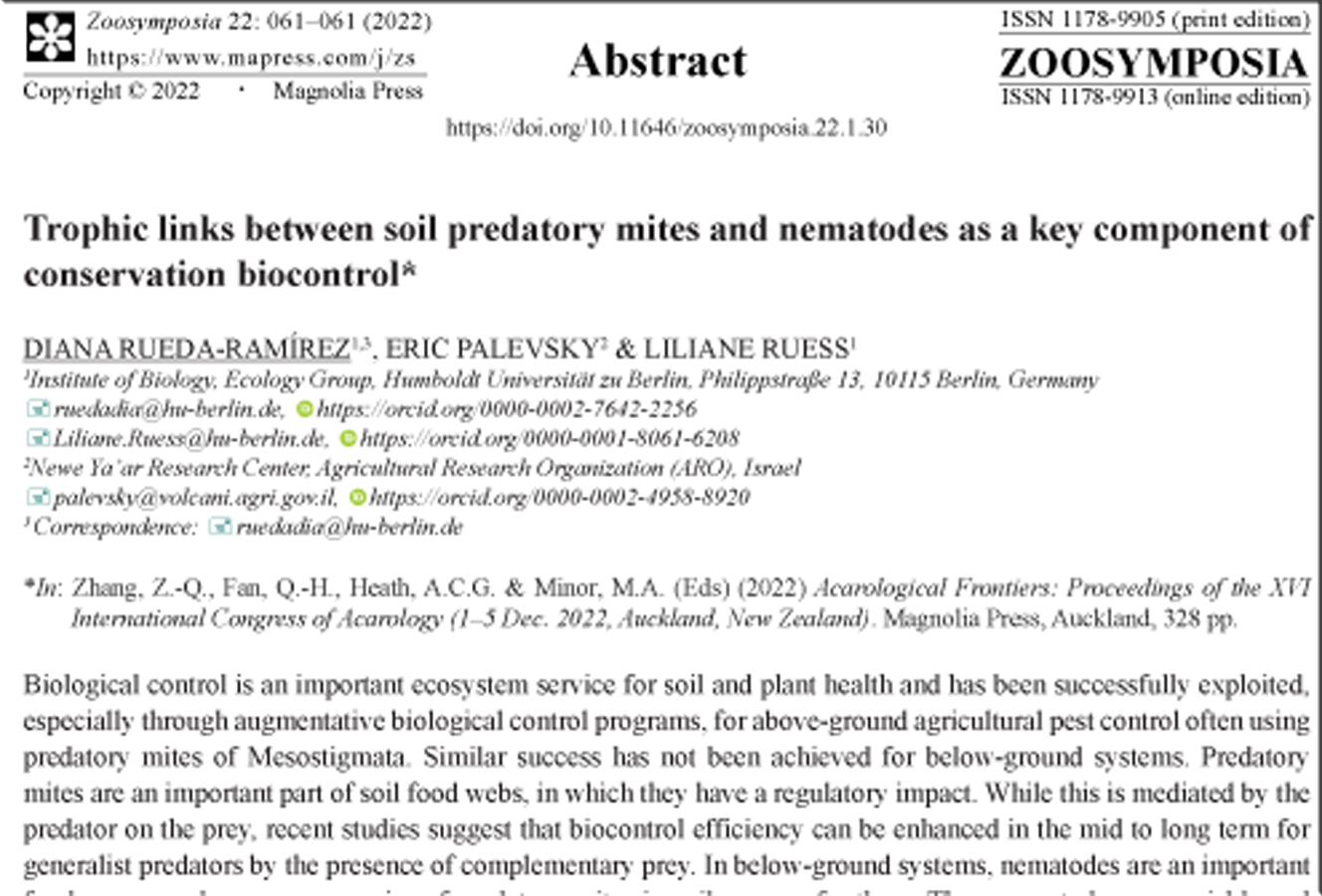 Biological control is an important ecosystem service for soil and plant health and has been successfully exploited, especially through augmentative biological control programs, for above-ground agricultural pest control often using predatory mites of Mesostigmata. Similar success has not been achieved for below-ground systems. Predatory mites are an important part of soil food webs, in which they have a regulatory impact. While this is mediated by the predator on the prey, recent studies suggest that biocontrol efficiency can be enhanced in the mid to long term for generalist predators by the presence of complementary prey. In below-ground systems, nematodes are an important food source and numerous species of predatory mites in soil may prefer them. Thus, nematodes are a viable and accessible alternative prey for these natural enemies. Our aim was to review the studies on mite-nematode trophic interactions and how these interactions affect the regulatory activity of predatory mites in soil. We found ca. 170 publications reporting a predator-prey interaction. The majority of the studies were conducted in the laboratory (149 studies), but important correlations between nematode and mite densities have been observed in greenhouses and in the open field. Most reports involved free-living nematodes (FLN), followed by plant-parasitic nematodes (PPN) and finally animal-parasitic nematodes (APN). These reports are for Astigmatina, Endeostigmata, Prostigmata, Oribatida (non-Astigmatina) and Mesostigmata, the latter group being the one in which most nematophagous species are known. The family with the most reports of nematophagy is Ascidae (46 species), followed by Macrochelidae and Laelapidae (both with 30 species). In many cases, a positive effect on reproductive parameters and developmental times of mite species has been observed with a nematode-based diet, especially FLN. Although still scarce, studies on species of Laelapidae, Macrochelidae, Parasitidae and Rhodacaridae have shown that supplementing FLN in the diet can favor reproduction and development, even though preference may change at different stages of development. Also, recent studies have shown that some organic amendments can increase the density and diversity of mites, FLN or both, enhancing top down forces by predatory mites in the soil food web. Although some steps have been taken, future studies should focus on transferring laboratory research to field and semi-field conditions. For this, a multidisciplinary approach is essential.