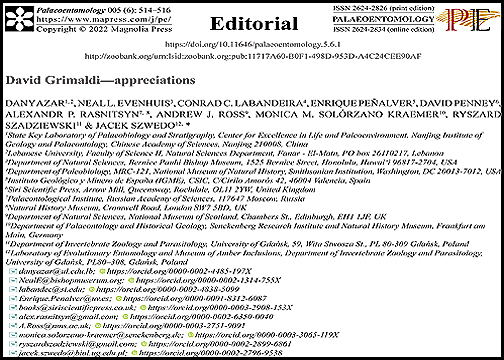 The previous issue of Palaeoentomology brought the first set of papers honoring David A. Grimaldi on the occasion of his 65th birthday. With the current one, it is continued, in recognition of his impact on the fields of amber studies, palaeontology, palaeo- and neoentomology, and evolutionary biology. After the success of Jurassic Park (both the Michael Crichton book from 1990 and the Steven Spielberg movie from 1993) everyone wants to know more know about the miracles of long ago that are encapsulated in petrified resin. Amber: window to the past (Grimaldi, 1996) originally published to accompany a 1996 exhibition at the American Museum of Natural History in New York, explored the properties of amber and revealed its role in tracing evolutionary history and its use in the decorative arts and jewelry. This surge in interest in amber and palaeoentomology resulted the establishment of the International Palaeoentomological Society in 2001 at the Second International Congress on Palaeoentomology—Fossil Insects, and particularly the study of insect inclusions in amber from various parts of the world. An essential reference for anyone interested in the study of amber fossils, insect evolution, and the earliest stages of the association between insects and angiosperms devoted to amber from New Jersey and edited by Grimaldi (2000), provided an incredibly vivid window into animal and plant evolution in the Late Cretaceous. Another book—Evolution of the insects (Grimaldi & Engel, 2005)—is the first comprehensive synthesis of all aspects of insect evolution integrating the living and fossil record. The book was a great source of information about what we know at the time of its publication, but also highlighted what we do not know, making the book a great source of inspiration for subsequent studies.