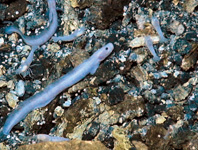 Knowledge of caddisflies of the Sunda Islands was insufficiently known until recent times; a survey of the caddis fauna of this area was given by Malicky (2010) and some more data were published recently (Malicky et al. 2011). A summary on the particular features of Trichoptera from 3 adjacent islands, Bali, Lombok, and Java, were given by Malicky et al. 2014. These were the first surveys of the local caddisfly fauna of Lombok, listing 60 species and anticipating that more species should occur there. It was shown that the caddisfly fauna of these islands is largely homogenous and there are not sufficient differences between Bali and Lombok to support the hypothesis of Wallace's line (Malicky et al. 2014). The comparative analysis showed continuous impoverishment of the caddis fauna from the Asian continent over the chain of islands from west to east. Unfortunately, the Trichoptera fauna of the easternmost Sunda Islands, Sumba, Sumbawa, Flores, Timor, and the Moluccas is almost unstudied. The Trichoptera fauna of these islands is, according to present knowledge, Asian. Since the previous material from Lombok was collected only once at the end of the wet season, it was necessary to have more data from other seasons. Hence we made another effort to sample caddisflies in this area. As a result, 8 more species were found, 2 of which were new for science. The updated list (Table 1) includes now 68 species.