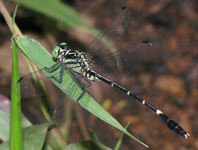 A new species of the genus Apollophanes O. Pickard-Cambridge, 1898 (Araneae: Philodromidae) with the first record to the Atlantic rainforest

Apollophanes has a wide distribution, with some species in Asia and most of the species recorded from North and Central America (World Spider Catalog 2016). New species described from the Galapagos Islands by Baert (2013) have extended the genus range to South America. According to Dondale and Redner (1975) and Dondale and Redner (1978), the species of Apollophanes have a moderately low prosoma, usually of yellow to orange-brown color and with black or brown spots on the lateral margins. The posterior eyes distances are equally spaced and the legs are long, slender and speckled with dark spots, with leg I usually being longer than IV (characteristic observed only in the male exemplar of the new species). The opisthosoma has a conspicuous heart mark, dark longitudinal spots on the lateral margins and a pale ventral region with purple spots. According to Dondale and Redner (1975) and Logunov (1996), Apollophanes shares some features with species of Cleocnemis, Thanatus and Tibellus, e.g. the shape and coloration patterns of the dorsal shield of the prosoma, as well as the slender legs with dark spots. Apollophanes can be distinguished from Cleocnemis by the presence of two tibial apophyses (ventral and retrolateral) and by the size of the copulatory ducts openings that are long slits that reach the posterior margin of epigastric furrow in Apollophanes, while in Cleocnemis the openings are shorter and situated in central region of the median septum (Dondale & Redner 1975). Apollophanes differs from Thanatus by the presence of macrosetae on the prolateral region of the metatarsus, and differs from Tibellus by the size of leg IV, that is longer than leg I (Dondale & Redner 1975).