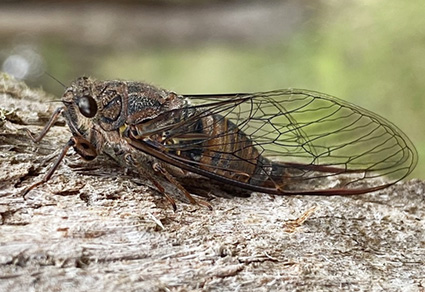 Five new species are described in the genus Yoyetta Moulds, each belonging to the Yoyetta tristrigata (Goding and Froggatt) species group. Yoyetta australicta n. sp. occurs in southern eucalypt woodlands in two separate populations, one extending from the foothills of the Mt Lofty Ranges and southern fringes of Adelaide north to the Flinders Ranges, and the other from Warrumbungle National Park and from Clandulla, near Orange and near Grenfell in New South Wales south to Mt Taylor in the Australian Capital Territory. Yoyetta corindi n. sp. has a restricted, coastal and subcoastal warm temperate distribution in north-eastern New South Wales open forest communities between Trustums Hill and Arrawarra, extending inland from south-west of Grafton to Tyringham. Yoyetta delicata n. sp. has an inland warm temperate distribution in eucalypt woodland and open forest from near Killarney and west of Warwick in south-east Queensland south to Cassilis and near Wyong in central New South Wales. Yoyetta ignita n. sp. is found from Flinders Peak and Mt Tamborine in south-east Queensland, south along the Great Dividing Range (and inland to Mt Kaputar) in New South Wales, with a disjunct population on the eastern slopes of Mt Ainslie in the Australian Capital Territory. Yoyetta robusta n. sp. is found from the Granite Belt in south-east Queensland south to the Glenn Innes area in northern New South Wales. The new species are all small–medium sized cicadas (15–25 mm body length) with male calling songs that are distinguishable from one another and from other species in the genus. In three of the new species (Y. australicta n. sp., Y. corindi n. sp. and Y. robusta n. sp.), the songs are characterised by sharp, high energy ticks or clicks, produced mainly in flight. Each of these species also produces ticks or clicks, sometimes in combination with a short buzz, while stationary. Of the remaining two species, one (Y. delicata n. sp.) produces a soft, coarse buzzing song while stationary and the other (Y. ignita n. sp.) produces a combination of buzzes and clicks while stationary. A key to species in the Y. tristrigata species group is provided.